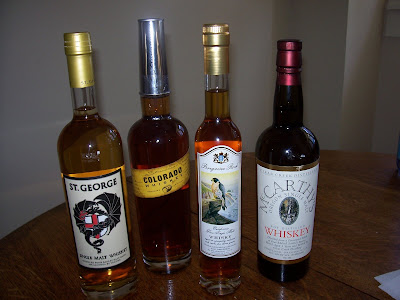 Whiskey Wednesday will take the day off next week for the July 4th holiday, and what better way to get ready to celebrate than with some American single malts.

Scotch single malts sure, Japanese even, but American? Yes Virginia, there is a burgeoning American single malt movement. They are being made in small batches, here and there, across the nation. They can be difficult to find, but I've tracked down as many as I could to bring you this round up of American single malt whiskey.

It is hard to imagine that one of the effects of the massive closure of military bases in the San Francisco bay area would be the manufacture of fine spirits, but so it is. St. George Spirits operates out of an old military hanger in Alameda (near Oakland), making vodka, liqueurs and brandy as well as its St. George Single Malt.

Speaking of brandy, St. George tastes like fruit brandy. I don't mean it's whiskey that tastes slightly of brandy, I mean it tastes like someone tapped the wrong cask! Sniff this stuff and you get a strong whiff of fruit, I'd say pear, like a fruit brandy or a sweet dessert Riesling. When you take a sip, you expect sweetness, but instead get an immediate jolt of spice which drives the fruit to the background. Then, when you swallow, you get that fruit back in the aftertaste (oh, sorry, I mean the finish). The mouthfeel is syrupy, which detracts some from the whole experience, leaving a coating on the tongue.

Ignore the anglophilia of this bottle's name and label, complete with dragon and coat of arms. Don't compare this to a scotch...it ain't that and it really shouldn't be trying to be that. What is it? A pleasant though curious whiskey full of fruit and spice. A good one for the brandy drinker or the curious wine buff, but not necessarily one that will please the typical whiskey aficionado.

To sum up: I Can't Believe it's not Pear Brandy.

A hometown single malt, St. James Spirits makes fruit brandies, rum, vodka, tequila and other spirits in Irwindale, just east of Los Angeles. Their single malt is made from peated Highland Scottish barley aged in oak bourbon casks. Oh, and a portion of the proceeds go save the endangered Peregrine Falcon. Whiskey with a conscience...only in Los Angeles.

Peregrine Rock is a sort of hybrid. The aroma is floral, a bit Irish, a bit bourbon, though with some fruit. The taste is like a cross between Irish and bourbon, smooth but sweet, with light fruit tastes and vanilla; I don't taste any real smoke. Nothing about this whiskey really speaks to me. The flavor is pretty unexceptional, missing the complexity of a good whiskey.

To sum up: Needs work.

Stranahan's doesn't use the term single malt, but it is a barley-based whiskey. Unlike the other distilleries listed here, Stranahan's only makes whiskey, and their whiskey is all-Colorado, using only local water and local barley. It's even tough to find a bottle outside of the state (I was lucky enough to snag some on a trip to Denver).

It's Bourbony but light. It has some strong banana flavor and some vanilla. I would guess that this does well over ice on a hot summer's day on the Front Range. Overall, a nice whiskey, and again, nothing like scotch. Lots of potential here and I'll be watching their future bottlings.

There is some weirdness going on with these Colorado folks. The bottle is capped with a flimsy metal shot glass, presumably so one can leave the store and get right to drinkin'. The label on my bottle notes that while it was being distilled the distiller was "listening to Bjork." Well, this may be good whiskey, but that's just creepy.

Clear Creek Distillery's McCarthy's Oregon Single Malt is one of the better known American single malts, having won some praise from critics. Along with whiskey, the distillery makes a wide variety of fruit brandies. Their single malt is made from peat-malted Scottish barley.

There is smoke there, but it doesn't taste like a peated scotch, where you inhale the strong smoke of a campfire or the char of the grill. It's more like the carbony smoke of "Oh shit, something's burning!" Maybe burnt barley stuck to the bottom of the pot. Smoke and burnt are different flavors...smoke is good, burnt is bad. In addition, there's not much under the smoke flavor-wise, none of the other tastes you would need to put the smoke in its place.

To sum up: Smoke but no fire.

Well, let's just say that the whiskey barons of Scotland shouldn't be fretting over their station in life. These American malts are young and underdeveloped. Flavor-wise, they are a bit of a hodge podge and haven't yet matured into something with a consistent character (either across distilleries or in a single bottle). They need some time and some more R&D to develop the complexity that I enjoy in a whiskey.

We should remember, though, that this experiment is still young. Overall, I'm proud of these American single malt pioneers. In grand American tradition, they have taken a legacy and turned it on its head. They aren't trying to be New Scotland but branching out in their own directions. There is some real potential here for a unique American whiskey to be born. They just haven't quite gotten there yet.

So let's raise a glass (or a metal jigger) to the diversity and creativity of the American single malt. Here's to many future July 4th celebrations with new and different American malts!